In 2006 I was working as a sous chef in a local fish house. The Chef and I were really good friends, we spent most of our time drinking and playing video games. I started to see less of him when he started dating a Chiropractor. I didn’t mind so much since I was the boss when he was gone.

The Chef came up to me one day and said “I found the girl you’re in a marry”, I was definitely curious. She was the office manager at the Chiropractors. He couldn’t wait, so we hatched a recon mission right then. On our break we would hit the store to pick up a card and chocolate and then stop in at the office to see his lady. While we were there I would just nonchalantly  check out this hottie office manager.

I wasn’t nervous until we pulled in, I had no idea what we were walking into.  the first thing I saw when I walked into the office was a gorgeous redhead. She was obviously annoyed to have another guy in distracting the doctor. With her being so busy and her glasses on her head she hardly even noticed I was there. But I noticed her. After we left I found out she didn’t see me, I was huddled in the corner a bit. I later found out she wasn’t looking to see anyone but with a little convincing the Chiropractor was able to give me her number.

We met the first time for coffee. I was so nervous I went to the bar across the street and pounded a couple Irish Car Bombs first. Our coffee date was great, she choked on whip cream and nearly slipped and I was drunk. Meg thought I wasn’t into her but the truth is I was trying to hold my sloppy ass together. We both had enough fun to go out again and within 2 weeks we were dating.

We were married a little over a year later, May 19th 2007. We just celebrated our 8 year wedding anniversary and couldn’t be happier. We have been through a lot together but it has always been together.

Our close friend offered to do our dorky matching anniversary tattoos. We will always be Wheels & Red… Kel & Meg… You & Me. Happy Anniversary, you’re my favorite. 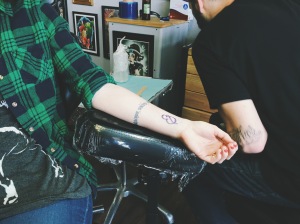 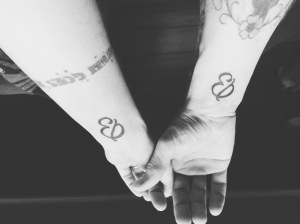 Born and raised in the pnw. Disabled in 2010 due to progressive Multiple Sclerosis. I started the Wheels & Red with my amazing wife Meg. Wheels & Red is a way for us to share our story with the world. Let's make this shit accessible. View more posts